There aren’t many things more satisfying to eat than a slice of warm homemade bread, especially when you bite into a crispy crust followed by a soft, chewy middle. But if your bread baking at home is not yielding that crunch, how can you fix it?

The ideal oven temperature for getting a good crisp crust is 425 degrees. Start by ensuring that the temperature in your oven is accurate. You can find oven thermometers at the grocery store. Why is the right temperature so important to the crust of your homemade bread? Gases in the yeast cause the fermentation process during baking. If the temperature of the oven is too low, the structure of the bread won’t set up properly, and ultimately the bread will collapse and the crust won’t brown the way it should. However, if the oven is too hot the opposite happens—the bread sets too quickly, before the gases have a chance to expand the way they should, and your loaf will burn.

Once you have the accuracy of your oven temperature resolved, the next thing to consider when perfecting your bread’s crust is the ingredients in your dough. High protein flour, instead of all-purpose flour, is the best choice for bread making. The higher protein levels allow for more moisture to be absorbed in the bread as it bakes. More moisture equals a thinner crust, which is more likely to be crispy and crunchy.

Your oven is ready; you’ve used the right flour. What is next for perfecting your homemade bread’s crust? A baking stone can help disperse the oven’s heat more evenly for a browner and crispier crust. You can also introduce a bit of steam into your oven, the way commercial bakers do, to promote a crunchy exterior on your loaf. The best way to do this at home is by placing a cast iron skillet on a lower rack in your oven before preheating. Once the oven temperature is right, place the bread in the oven on the baking stone. Then standing away from the oven, fill the cast iron skillet with about half an inch of hot water. There will be an immediate burst of steam (that’s why you should stand as far away as possible). Close the oven door, and do not reopen it for at least 10 minutes.

To keep your loaf crusty after it is baked, store it in a paper bag or simply out on the counter. Sheila McCann, founder of House of Bread, offered some of her own tried and true tips. “Bakers also can place an upside down cookie sheet in the oven, and let it get hot. Then transfer the dough on to the cookie sheet. The key is to have the dough begin the baking on an already hot surface,” she shared. And of course, for those times when you want the immediate gratification of a perfectly baked, crunchy loaf of bread, House of Bread offers a wide selection of tasty options. 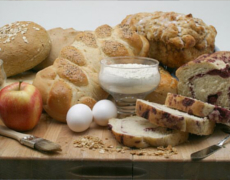 The History of Bread

Whatever form it takes, pita or tortillas, pumpernickel or sourdough, bread has been eaten by every culture. What’s more, this one food has been a part of our lives for more than 30,000 years. But why? Bread is easy to produce from common natural ingredients, and it packs solid nutrition with powerful carbohydrates that are a great source of energy.

At some point, prehistoric man went from merely mixing grains in water to cooking these ingredients on hot stones. Research released from a 2010 study conducted by the National Academy of Sciences showed prehistoric mortar and pestle-like rocks contained traces of starch, probably from the roots of cattails and ferns.

As wheat and barley were cultivated in the Fertile Crescent, about 10,000 years ago, our ancestors shifted from a diet of animal meat (hunter-gatherer) to one that contained more plants (agricultural). Of course this impacted not only diets, but also how prehistoric man lived. The advent of agricultural societies meant that people started to settle in one place, rather than roaming. It also allowed larger groups of people to live together. Our modern lives would not exist if man had never shifted from the hunter-gatherer life.

Leavened bread, the precursor to our modern fluffy loaves, also probably first developed during prehistoric times. Yeast is all around, so if some found its way into a bowl of grain and water, the mixture would have naturally undergone leavening. Yeast cells have been discovered in bread made by ancient Egyptians dating back to 300 B.C.

Of course the next major change that allowed our forbearers to get closer to our modern bread came with the introduction of refined flour. Early flour would have been coarsely ground, meaning those loaves would have been denser and been somewhat akin to our whole grain loaves of today. However, around 800 B.C. the Mesopotamians created the first milling process to more finely grind grain into flour.

With industrialization, bread changed yet again. Otto Frederick Rohwedder created a machine that would not only slice, but also wrap bread, in 1928. And while generations of bread eaters have preferred white bread and viewed it as a form of status, that too changed in the last few years of the 20th century. The nutritional value of whole grain breads has come to be valued more as our attitudes about diet and lifestyle have shifted.

Another area where industrialized practices have changed bread is the Chorleywood Bread Process, which speeds up the fermentation process and allows for lesser quality flour to be used. This process, in addition to chemical additives that can be added to bread dough to decrease the rising and baking time, have dramatically changed not only the structure of modern bread, but also its nutritional value. At House of Bread, we don’t look for short cuts that save us money. Our mission is to craft the highest quality bread that evokes the history of bread, when it was a food rich in nutrients that sustained civilizations. 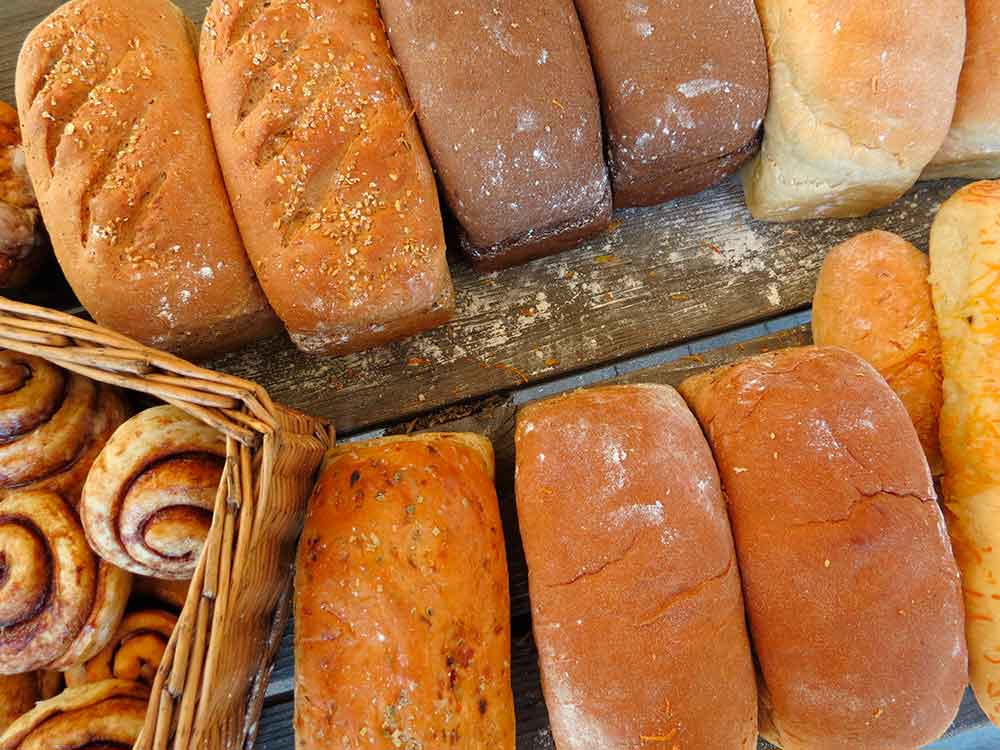 What we eat and why has become as trendy as what skirt lengths are in vogue this season. One year fat is bad. Next it is carbs. For the past five years, it seems like everyone wants to blame gluten for feelings of bloating or mental fogginess, as well as bowel changes. These reactions are perceived as gluten intolerance, and it’s behind the recent rise of gluten free products.
Eating clean by avoiding processed and refined foods is a good way to improve your overall health. Additionally, people probably are eating too much gluten, but that may be because of the addition of vital wheat gluten. Vital wheat gluten is used by commercial bread manufacturers (and even most organic bread makers) to speed up the bread making process. This highly condensed form of gluten leads to an unnatural amount of gluten in the finished product, which many people’s bodies may not be able to handle.

Are FODMAPs the Real Culprit?

Not sure what a FODMAP is? Short for fermentable oligosaccharides, disaccharides, monosaccharides, and polyols, new research is hinting that FODMAPs may be causing some of the intestinal distress that many have blamed on gluten. Fructans are a kind of FODMAP, which wheat contains. But wheat isn’t the only food that contains fructan; in fact it is found in a range of other things, such as artichokes, bananas, broccoli, garlic, leek bulbs, melons, onions, white peaches and rye, according to researchers at Georgia Regents University. No large-scale studies have been done yet to see how common a problem fructans are for people, but those who are known to have problems with fructose malabsorption show similar symptoms as those with celiac disease and irritable bowel syndrome.

Of course many who are interested in removing gluten from their diet are doing so as a means of losing weight. Many years ago, before gluten-free products exploded, that idea may have contained some truth, because to give up gluten 10 or even five years ago meant simply giving up bread, muffins, cake and other bakery items. But today, all of those foods are available in a gluten-free form, so you can have all the calories of your favorite treat, just minus the gluten.

It is important to read labels, avoiding products that include vital wheat gluten. The unnatural level of gluten may be to blame for any digestive issues. Want to have your bread and eat it too? House of Bread’s products are made with natural gluten only, giving you the healthiest, and tastiest, option!

Tuesday – Friday: 7am – 5pm
Saturday: 7am – 3pm
Sunday: Closed during the Covid-19 Pandemic
Due to lack of staff, we can no longer be open on Mondays. Sorry for the inconvenience.

© 2020 HOUSE OF BREAD. ALL RIGHTS RESERVED.
SITE BY US-Web-Design.com